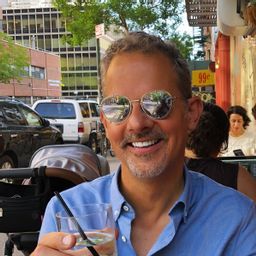 Johnny Symons is an Emmy-nominated documentary filmmaker and Associate Professor in the School of Cinema at San Francisco State University.  His film DADDY & PAPA (2002) was nominated for the Grand Jury Prize at Sundance, aired on PBS and international television, and garnered more than a dozen festival awards. His feature documentary BEYOND CONCEPTION (2006) premiered at the Florida Film Festival and aired on Discovery Health Channel. ASK NOT(2008) broadcast on PBS’ Independent Lens, won the GLAAD award for Best Documentary and screened for Congress at the US Capitol. His latest film OUT RUN (2016, produced and directed with S. Leo Chiang) premiered at the Full Frame Documentary Film Festival, won Best Cinematography at the Los Angeles Asian Pacific Film Festival and broadcast on public television in 2017. Symons’ work has screened at more than 200 international film festivals and is used by hundreds of college educators and community organizers.

Symons is the co-producer of the Academy Award-nominated LONG NIGHT’S JOURNEY INTO DAY(2000), which won the Grand Jury Prize for Best Documentary at Sundance and broadcast on HBO. He has been a Fellow at the Sundance Institute’s Documentary Film Program, and has worked as a freelance director, producer, and cinematographer on numerous award-winning documentaries. His work has been funded by ITVS, Sundance, Tribeca, Frameline, Pacific Pioneer, the Horizons Foundation, and the California Council for the Humanities.

Symons graduated with honors from Brown University and has a master’s in documentary production from Stanford University.  Currently, he is Coordinator of the Documentary Program and Director of the Queer Cinema Institute at San Francisco State University. Prior to his work at SFSU, he taught documentary for 12 years in other Bay Area film programs including Stanford, University of San Francisco, and the California College of the Arts.

Sessions in which Johnny Symons attends