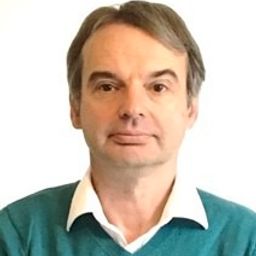 Professor Haydn Thompson, BSc, PhD. CEng has over 35 years’ experience working in a mixture of senior industrial research and development roles in flight control systems, space programmes and signal processing applications for leading companies. For nearly 20 years he was the Programme Manager of the Rolls-Royce Control and Systems University Technology Centre. Currently he is Managing Director and Owner of THHINK Group of Companies. He is recognised and used by the European Commission as an expert in many fields and is a consultant to a range of companies and government bodies.

He has acted as a consultant to the European Commission, Rolls-Royce Aerospace, Rolls-Royce Marine, Rolls-Royce Nuclear Submarines, Rolls-Royce Civil Nuclear, the MoD, the TSB and Formula 1 Racing. He has over 100 publications in the field of CPS and IoT applications, including on distributed systems, multi-disciplinary multi-objective optimisation, gas turbine engine control, fault diagnosis and health monitoring, wireless communications, energy harvesting, rapid prototyping and co-simulation. He has also written two books on gas turbine engine control and contributed chapters to several others. In addition to running many research programmes (400+) with Rolls-Royce, Professor Thompson was the co-ordinator for the European Union funded IST FLEXICON project, led work on the More Electric Aircraft in the Airbus/EU MOET project and led two consortia of 4 Universities in the WICAS and SWIFT projects with Airbus. He has also run successful research programmes with rail companies developing self-powered wireless sensor technologies for infrastructure monitoring. Recent EU projects include CPSoS (Cyber Physical Systems of Systems) where he chaired the Expert Group of Transport and Logistics covering Aerospace, Automotive, Rail, Maritime and Logistics, Road4FAME defining a Roadmap for Manufacturing Research within Europe and PICASSO which promoted Joint EU-US Collaborative Research. He is currently leading work on the creation of a Green Technology Radar for industry in the EU Smart4Europe project.

Sessions in which Haydn Thompson participates