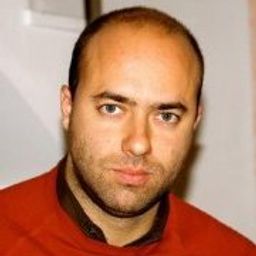 Filippo Cavallo, MScEE, Phd in Bioengineering, is Assistant Professor at the BioRobotics Institute of Scuola Superiore Sant’Anna, (Pisa, Italy), focusing on cloud and social robotics, wireless and wearable sensor systems, biomedical processing, acceptability and ICT roadmapping. He participated in various National and European projects and currently is principal investigator of the DAPHNE Project and Work Package responsible in TransSafe (AAL-JP) and Centauro (Tuscany Region). Recently he was also project manager of Robot-Era, AALIANCE2 and Parkinson Project. He was visiting researcher at the the EndoCAS Center of Excellence, Pisa, Italy working in Computer Assisted Surgery (2005-2007); at the Takanishi Lab, Waseda University, Tokyo, Japan working on wireless sensor network (2007); at Tecnalia Recerch Center, Basque Country, Spain working on wearable sensor system for AAL. He was granted from the International Symposium of Robotics Research Committee as Fellowship Winner for best PhD thesis in Robotics (2007); from the Regional POR FSE 2007-2013 for a 3-years Research position at The BioRobotics Institute, Scuola Superiore Sant’Anna, Pontedera, Italy (2010-2013); from the ACCESS-IT 2009 for the Good Practise Label in Alzheimer Project (2009); from the Well-Tech Award for Quality of Life with the Robot-Era Project (2014); from the SMAU Award for Quality of Life with the Robot-Era Project (2014) and from iNEMO Challenge from STMicroelectronics (2015). In 2016 he was also chair of the Italian Forum of Ambient Assisted Living and related Summer School in Italy. He is author of various papers on conferences and ISI journals.

* Wearable sensor network for musculoskeletal modeling of human body and their application to biomechanics, gesture analysis and human motion measurement.

* Roadmapping activities for definition of Strategic Research Agenda for EU Commission in the field of Ambient Assisted Living and ICT technologies.

Selena Nemorin, Department of Media and Communications for the VIRT-EU research project: Values and Ethics in Innovation for Responsible Technology in Europe (Participant.e)