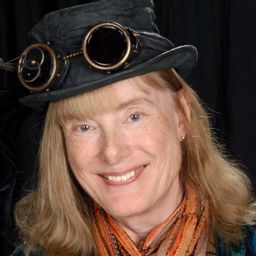 Author and Editor
Participates in 5 items
Laurel Anne Hill has authored two award-winning novels: Heroes Arise (Komenar Publishing, 2007) and The Engine Woman's Light (Sand Hill Review Press, 2017), a gripping spirits-meet-steampunk tale. The Engine Woman’s Light is the recipient of the 2017 Independent Press Award (steampunk category) and a Kirkus star. Kirkus has placed the novel on its list of the best 100 indie books in 2017 and top six indie teen.

Laurel’s published short stories and nonfiction pieces total over forty and have appeared in a variety of anthologies and journalistic media. The fans of HorrorAddicts.net elected her “Most Wicked” in 2011 for her steampunk-horror podcast Flight of Destiny. She is the Literary Stage Manager for the annual San Mateo County Fair in California, a speaker, writing contest judge, and editor.