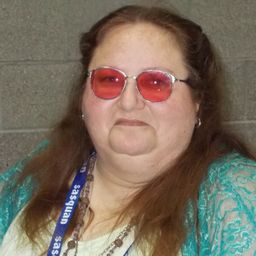 Author, Editor & Literary Opportunist
SFWA, DAW Books
Participates in 4 items
ElizaBeth “Lace” Gilligan is the author of the first two Gypsy Silk novels: Magic's Silken Snare and The Silken Shroud which were released by DAW and the third book in the series, Sovereign Silk is at her publisher's. (You can find her first two books on Amazon.) She is currently working on the sixth book in the series, Silk's Children of the Bloods . (The fourth book is Silken Devotions and the fifth is Silken Treasure Lost and are in final review before being sent to the publisher) and a new series beginning with The Wylf Soldier. Besides her novels, ElizaBeth has had her short stories published in a dozen or so anthologies, and Black Gate Magazine. Beyond her fiction, ElizaBeth is an established Journalist, winning a William Randolph Hearst Award in her Freshman year of college at Kent State University. Her first edited anthology up is AlternaTEAS, a steampunk/urban fantasy involving intrigue over tea. ElizaBeth is a dedicated wife, mother and now, happily, grandmother. She has been married for 33 years to Douglas Gilligan, mother to Brianna (and Charles Lurhman) and Patrick. Her beautiful granddaughters are Alexis and Olivia. In addition to her writing, ElizaBeth is a lover of research and just about all things crafty. She is a regular public speaker at conventions, schools and private gatherings. She is an active member of SFWA (Science Fiction and Fantasy Writers of America) and has served as Secretary on the Board of Directors. Her website is www.elizabethgilligan.com, but oddly has nothing on it. She can be found posting regularly on FaceBook where she can be found under her given name “ElizaBeth Gilligan.” Please stop by and say “hi!” If you know her from FaceBook, please do come up and introduce yourself.

Sessions in which ElizaBeth Gilligan participates