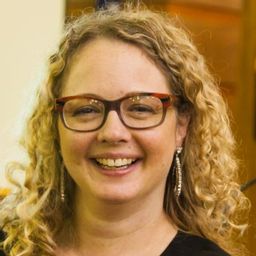 Director, Congregational Innovation
Union for Reform Judaism
Participates in 1 Session
Rabbi Esther L. Lederman serves as Director of Congregational Innovation at the Union for Reform Judaism. Prior to that role, she was the associate rabbi at Temple Micah in Washington, DC. She was ordained in May 2008 from Hebrew Union College-Jewish Institute of Religion in New York City. Prior to moving in Washington, DC, Rabbi Lederman was the Marshall T. Meyer Fellow at Congregation B’nai Jeshurun in Manhattan. From 2010-2015, she led with Michelle Citrin an extremely popular alternative High Holy Day experience for young unaffiliated Jews in Washington.

Prior to becoming a rabbi, Esther worked for several years in the non-profit world. She held positions with the Israel Policy Forum and directed a project on Middle East peace education for the Union for

Reform Judaism. Prior to that, she was the National Director of Habonim Dror North America. She received her BA in Political Science and Middle Eastern Studies from McGill University in 1996.

Esther is very involved in the wider Jewish community, at both the national and local levels. She sits on the national Board of T’ruah: The Rabbinic Call for Human Rights, chairs the Advisory council of Avodah in Washington, and serves on the national board of Ameinu, a national, progressive Zionist organization. Originally from Ottawa, Canada, she now makes her home in Virginia with her husband and two children.

Sessions in which Esther Lederman participates