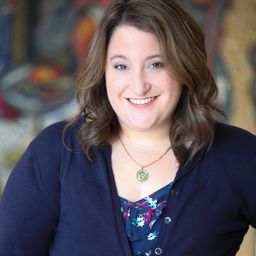 Cantor
Temple Emanuel of Beverly Hills
Participates in 1 Session
Cantor Lizzie Weiss grew up at Temple Emanuel of Beverly Hills. She was very involved in all things music. From intergenerational productions at the Emanuel Arts Center, to Junior Cantors, to the High Holy Day Professional Choir, Cantor Weiss developed her Jewish identity with her experiences in Jewish living at Temple Emanuel, Camp Swig/Newman and all under the wing of her Uncle Rabbi Kenneth J. Weiss, and brother Rabbi Scott Hausman-Weiss.

Cantor Weiss is known for her powerful voice and welcoming presence. She values creating accessible and uplifting musical experiences for people of all ages, and strives to bring contemporary pieces along with nostalgic melodies to her congregants.

After graduating from the University of California, Irvine with a degree in drama, Cantor Weiss moved to New York and was cast in the Broadway National Tour of Disney’s High School Musical. After a few years on the road, Cantor Weiss landed back in Los Angeles, and entered cantorial school at the Academy for Jewish Religion, under the mentorship of Cantor Nathan Lam and Cantor Perryne Anker. While in school, she served as student cantor at Congregation B’nai Tzedek for three full years, and four High Holy Day seasons. Cantor Weiss has now served as cantor of Temple Emanuel of Beverly Hills for three years.

When not on the Temple Emanuel bimah, Cantor Weiss can be found singing in Jewish and secular concerts, alike, throughout Los Angeles, and continues to teach private voice lessons to kids and young adults.

Sessions in which Lizzie Weiss participates