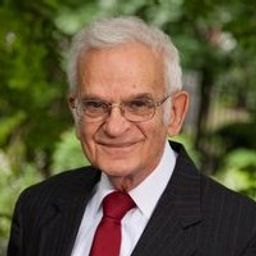 President
Freehof Institute for Progressive Halakhah
Participates in 1 Session
This U.S. Reform rabbi was born in Augsburg, Germany, and immigrated to the United States in 1940. He received his B.A. from Drury College (Springfield, MO., 1950) and ordination and an MHL from Hebrew Union College in 1955. He earned his DHL in 1961 from HUC-JIR, which also granted him an honorary D.D. in 1975; he also received a D.D. from Drury College in 1990. Augsburg honored him with a special award in 2014. Immediately following ordination, Jacob was named assistant rabbi at Rodef Shalom Congregation in Pittsburgh, Penn., under Rabbi Solomon Freehof. He served as a chaplain in the U.S. Air Force in the Philippines during the years 1955–57. In 1966, Jacob succeeded Freehof as senior rabbi, becoming emeritus in 1997. He was adjunct professor at the Pittsburgh Theological Seminary (1968–74). In 1990 he along with a small group re-established Liberal Judaism in Germany. For several years he served as the Honorary Liberal Rabbi of Munich, Germany and in 1998 was co-founder of the Abraham Geiger College, the first rabbinic seminary in Central Europe since the Holocaust in Berlin/Potsdam. He continues as its President and has ordained six classes.

Jacob is also president of the Solomon B. Freehof Institute for Progressive Halakhah, an international forum for Jewish law, and of the Associated American Jewish Museums, which organizes free art exhibits for synagogues and Jewish centers. The Freehof Institute holds seminars in North America, Europe or Israael each year on Jewish law and has published 23 volumes on topics as diverse as War and Terrorism in Jewish Law, The Sexual Issues in Jewish Law, and The Internet Revolution and Jewish Law. He took a leading role in interfaith dialogue with his book Christianity through Jewish Eyes (1974, 2007) which brought him into a close friendship with Cardinal John Wright and Cardinal Donald W. Wuerl. He was president of the Religious Education Association of America (1981–85). Jacob served the Reform movement in the United States as president of the Central Conference of American Rabbis (CCAR) (1991–93). His interest and expertise in Jewish law led him to serve as chairman of the Responsa Committee of the CCAR (1974–1990). and chairman of the International Responsa Committee of the World Union for Progressive Judaism (WUPJ) He served as president of the Religious Education Association of the United States (1981–85). He and his wife (Irène Jacob) established the largest Biblical Botanical Garden in North America in 1986 and published in that field. He also wrote on interfaith issues. Jacob served as overseer of HUC-JIR, Vice-President of the World Union for Progressive Judaism (1990–94), and chairman of the Publications Committee of Hebrew Union College Press (1976–1999). As CCAR president, he emphasized a broader Reform interpretation of the halakhah. As the sixteenth generation of rabbis, he has continued the work of Benno Jacob's biblical commentaries.

Jacob’s has published forty-three books and more than twelve hundred essays, sermons, and monographson a range of topics which include responsa, Jewish theology, biblical studies, interfaith dialogue, modern Jewish problems, and gardening together with his wife, Irene Jacob.

Sessions in which Walter Jacob participates