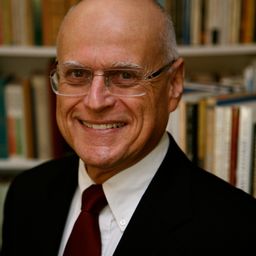 Professor Emeritus of Midrash and Related Literature
Hebrew Union College-Jewish Institute of Religion
Participates in 1 Session
Rabbi Lewis M. Barth is Professor Emeritus of Midrash and Related Literature at Hebrew Union College-Jewish Institute of Religion - Los Angeles and former Dean. He is a native of Los Angeles, graduated from UCLA, studied at HUC-JIR’s Los Angeles Campus and was ordained and has his PhD from HUC-JIR in Cincinnati. He was a member of the faculty at the Los Angeles Campus beginning in 1969 and served as Dean from 1970 to 1979 and again from 1997 to 2006. After his retirement from the deanship he continued to teach at HUC-JIR until June, 2012.

In 2006. he became a Non-Clinical Candidate and then, in 2010 a Research Candidate at the Institute of Contemporary Psychoanalysis in Los Angeles. He received his Doctorate in Psychoanalysis from ICP, February 3, 2016. His psychoanalytic practice is in Encino, CA.

At HUC-JIR his courses included Midrash, Aramaic, and seminars on Rabbis as Charismatics and Wonder-workers, “The Ten Trials of Abraham,” and Ancient Rabbinic Sermons.

As part of the HUC-JIR--USC joint Judaic studies program for several years he taught “An Introduction to Jewish History” and created and taught the course “Jerusalem as a Holy City for Jews, Christians and Muslims.” Every other summer for over twenty years he taught about Judaism, Jewish values and aspects of rabbinic literature in Berlin to German Protestant theology students at the Institute Kirche und Judentum.

During his deanship, Rabbi Barth was primarily responsible for bringing Rabbinic Ordination to the HUC-JIR’s Los Angeles Campus.

He was a member of the CCAR Ethics Committee and is presently Chair of the Ethics Committee of the Institute of Contemporary Psychoanalysis. He is an Instructor at ICP and teaching a course on Ethics and Boundary Issues.

A Select Bibliography of Articles of Lewis M. Barth includes:

“Thoughts on Forgiveness in Psychoanalysis and Judaism,” in Between Jewish Tradition and Modernity: Rethinking an Old Opposition, Essays in Honor of David Ellenson, edited by Michael A. Meyer and David N. Myers (Wayne State University Press: Detroit, 2014), pp. 237-248.

“The Image of Sarah in Trial IV of a ‘Lection for the Second Day of Rosh Ha-shanah’,” in THE BIBLE IN THE LIGHT OF ITS INTERPRETERS: Sarah Kamin Memorial Volume, edited by Sara Japhet (The Magnes Press, The Hebrew University: Jerusalem, 1994), pp. 157-169 [Hebrew].

“Genesis 15 and the Problems of Abraham’s Seventh Trial,” in, MAARAV, A JOURNAL FOR THE STUDY OF THE NORTHWEST SEMITIC LANGUAGES AND LITERATURES [LET YOUR COLLEAGUES PRAISE YOU: STUDIES IN MEMORY OF STANLEY GEVIRTZ], Vol. 8, Part II, edited by Robert J. Ratner, Lewis M. Barth, Marianne Luijken Gevirtz,

“Lection for the Second Day of Rosh Hashanah: A Homily containing the Legend of the Ten Trials of Abraham,” HUCA, LVIII (1987), Hebrew pages 1-48.

Sessions in which Lewis Barth participates