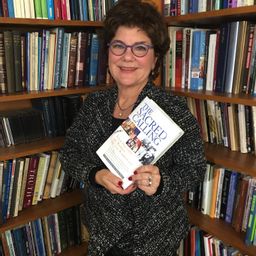 Rabbi Karen L. Fox is the first woman rabbi to serve at Wilshire Boulevard Temple, the fourth woman rabbi in Jewish history, and one of the few rabbis licensed as a psychotherapist. During Rabbi Fox’s 25 years of leadership at Wilshire Boulevard Temple, she impacted generations of Temple families, creating a vibrant Jewish life for them as a community and individually. As Rabbi Steve Leder, Wilshire Boulevard Temple’s Pritzker Chair of Senior Rabbinics, said: “When it comes right down to it—very few rabbis deeply affect another person’s life. Karen is one of the few. She is the best one-on-one rabbi I have ever known. She is a rabbi’s rabbi.”Although officially retired from Temple life, Rabbi Fox began an ‘encore career’ as she guides Rabbinic students at the Hebrew Union College in Los Angeles, by teaching two unique courses: Lifecycle and Pastoral Counseling Skills, and Rabbi as Symbolic Exemplar, a class in Professional Ethics.  She also provides counseling and consulting through her private practice, Rabbi Karen Fox: In Context.When she arrived at Wilshire Boulevard Temple in January 1985, Rabbi Fox immediately made a difference in the life of the Temple. She reinvigorated Jewish learning and living for hundreds of campers and staff as Director of Camp Hess Kramer and was ultimately honored as a “Legend” of the Wilshire Boulevard Temple Camps. Starting in 1998, she developed unique opportunities to engage adults at the Temple’s Audrey and Sydney Irmas Campus. Through the Caring Community and the Fields Center for Jewish life and Values, Rabbi Fox taught and implemented core Jewish values, teaching lay leaders to care for each other and their families during moments of life cycle transitions. Rabbi Fox facilitated a compassionate cadre of volunteers who continue to reach out to ill and homebound congregants—the chaverim-caring friends.Through her love of Torah, Rabbi Fox led many adults and young people to commit to the study of Jewish texts and find personal meaning of these Jewish treasures in their lives. As the founder of the Women’s Torah Study group and its leader for 18 years, she guided Los Angeles women to uncover the wisdom and wonders of Torah, focusing on different commentators each year.Rabbi Fox has been and is an activist on behalf of Israel, leading specialized adult trips to Israel and advocating for the Reform Jewish movement in Israel. Rabbi Fox was the national Rabbinic Associate Chair of ARZA (Association of Reform Zionists of America), which promotes the Reform voice in Israel. She also rode the ‘Off Road’ Ride for Reform, a challenging bike course that benefited Reform Jews in Israel, through first ever opportunities for Mother-Daughter Bat Mitzvah experiences. (It was exhausting but wonderful!)Rabbi Fox has continued to enhance Wilshire Boulevard Temple’s national and international reputation by engaging in the larger Jewish community. Rabbi Fox served as President of the Pacific Association of Reform Rabbis, as a member of the National Board of Israel Bonds, and as a member of the Board of Trustees, the Israel Convention Planning Committee, and the Ethics Committee of the Central Conference of American Rabbis (the world-wide organization of 2,000 Reform rabbis). She has mentored dozens of rabbinic and cantorial students and continues to guide the next generation of rabbis as an Adjunct Professor at Hebrew Union College in Los Angeles.From 1978-82, Rabbi Fox was the first woman rabbi to serve the national Reform Jewish Movement as a Regional Director of the Union of American Hebrew Congregations (now Union of Reform Judaism). In 1980, she and her brother, Rabbi Steven A. Fox, were the first sister-brother siblings in American Reform Jewish history to both be ordained as rabbis.After completing her bachelor’s degree at UCLA in 1973, she earned a master’s in Hebrew literature and was ordained at Hebrew Union College-Jewish Institute of Religion, New York, in 1978. She earned an additional master’s degree in counseling psychology from Pepperdine University in 1992, and is a licensed California marriage and family psychotherapist. Rabbi Fox continues to study at the Shalom Hartman Institute in Jerusalem and as a member of the Institute for Jewish Spirituality.Rabbi Fox has published a user-friendly guide to Jewish holidays, called Seasons for Celebration (Putnam, 1992), along with numerous articles on Jewish thought and women’s experiences in religious and therapeutic journals.She is married to Michael Rosen, and is a proud mother to Avi (Liz) and Benjy (Julie) and an “Omi” (Grandmother) to little David, Lena and Izzy.If you'd like to reach Rabbi Fox, contact her at 213 6310503.