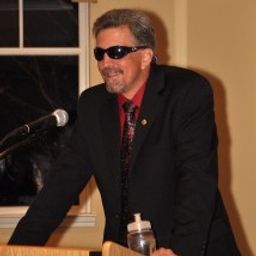 During two short but significant weeks in 1989, a devastating neurological disease transformed Randy Pierce from a healthy and ordinary young man to a blind man completely uncertain of his future. Randy’s passion for experience encouraged him to use adversity as a positive catalyst for growth and opportunity, resulting in such amazing adventures, honors and accomplishments as:

· historic hiking accomplishments around the world from New Hampshire’s White Mountains to the Andes in Peru to the summit of Kilimanjaro in Africa;

· running an ever-growing number of marathons in several states, and several ultra-marathons;

· being inducted as a fan into the Pro Football Hall of Fame in Canton Ohio;

· co-authoring his first book in 2018 with wife Tracy;

· delivering hundreds of live motivational presentations to a current total count of over 96,000 school students; and

· 2020 Vision Quest now having donated over one-half million dollars to the vision services charities it supports.

A New Hampshire native, Randy earned his BSEE from the University of New Hampshire in 1988 and enjoyed a successful career at Digital Equipment Corporation as a hardware design engineer. But as his progression toward total blindness moved forward, Randy transitioned in 1994 from engineering to a variety of volunteer projects such as tutoring and martial arts instruction, which allowed him to develop and hone his teaching and presentation skills.

Fast-forward to today, when Randy is the founder and ten-year President of 2020 Vision Quest, an organization that leads and inspires students and professionals to reach their peak potential while providing financial support for crucial vision services. Randy is also past Chairman of the Board of Directors of Future in Sight, and a past president of the Hudson NH Lions Club. Randy’s and 2020 Vision Quest’s accomplishments and accolades are well chronicled at 2020visionquest.org, but a few recent highlights include:

· In 2016, he received the Jo Adcock Service Award from Future in Sight.

· The University of New Hampshire’s Alumni Association named alumnus Randy as the 2015 winner of its Award of Excellence for Outstanding Service.

· Toastmasters International named Randy a winner of its 2015 Communication and Leadership Award.

· New Hampshire Magazine included Randy in its recent “It List” of significant leaders in the state.

· Randy and Quinn were also featured in the February 2014 airing of an NHPTV episode with host Willem Lange titled “Hiking in the Dark,” which won a Boston/New England Emmy for Outstanding Magazine Program/Special.

· Randy’s short story about the life of his dog guide Quinn was published in 2014.

· In 2018 he released his first book—co-authored with wife Tracy—See You at the Summit: My Blind Journey from the Depths of Loss to the Heights of Achievement.

Randy delivers riveting, positive, and powerful messages that help organizations lead members to their very own versions of “reaching their peak potential.”

He has delivered keynotes and motivational presentations to dozensof corporations, including:

A two-time TED Talk presenter (video links below), he has also spoken at many colleges and universities such as M.I.T., Boston University and the University of New Hampshire, including ahandful of commencement addresses.

· Feature roles in NHPTV’s Emmy-award-winning “Hiking in the Dark;”

· Oberto’s 3-minute feature on Randy in its “Heroes of Summer” series; and

For links to more than 150 print, web and broadcast coverages of Randy and 2020 Vision Quest, please refer to https://2020visionquest.org/in-the-media/.

Sessions in which Randy Pierce participates