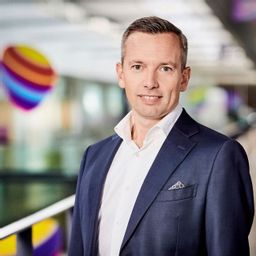 Thomas Kjærsgaard is VP of the Enterprise division at Telia Denmark. He is born in 1972 and holds aGraduate Diploma (HD) in finance from CBS (Copenhagen Business School). He furthermore has a diploma in Business Strategy from Insead.

Thomas Kjærsgaard’s career has been wide-ranging, and most recently – before joining Telia in August 2018 – for more than 10 years he was at Microsoft where he was Sales Director as well as in charge of numerous different cloud, hosting and digitalization projects for some of the largest enterprise customers in Europe.

Earlier in his career, Thomas Kjærsgaard has held leading positions at Børsen, WebTop and BRFkredit.

At Telia, Thomas is part of the Executive Board that jointly defines the direction of Telia’s Danish operations, with a focus on digitalization, innovation, IoT solutions, new business and partnership models.

Sessions in which Thomas Kjærsgaard participates