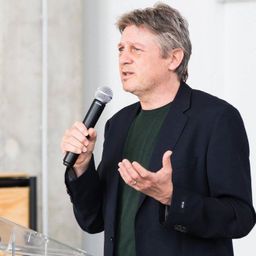 Rob van Kranenburg (1964) wrote The Internet of Things. A critique of ambient technology and the all-seeing network of RFID, Network Notebooks 02, Institute of Network Cultures. He is co-founder of bricolabs and the founder of Council. Together with Christian Nold he published Situated Technologies Pamphlets 8: The Internet of People for a Post-Oil World. He worked as Community Manager at the EU Project Sociotal, and currently as Ecosystem Manager of the Horizon 2020 Project TagItSmart. Rob is co-editor of Enabling Things to Talk Designing IoT solutions with the IoT Architectural Reference Model, Springer Open Access. Rob is in the SmartCitiesWorld Advisory Board. He chairs AC04 - IoT Hyper-connected Society of the IERC, The European Research Cluster on the Internet of Things. He is a member of The IoT Asia 2017 International Advisory Panel (IAP).