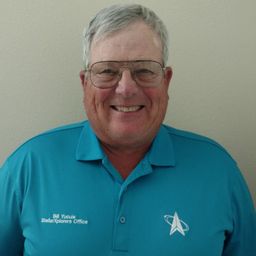 Bill taught 8th grade math for six years in Orange County, where he was head of their Math Department for two years.

Bill was hired by Lyman High School in 2002 to start a four-year Aerospace track for the Seminole County Institute for Engineering Magnet program.  The Aerospace track required students to take an Aerospace class as an elective each year.  They spent the freshman year concentrated on basic engineering skills. The sophomore year focused on aircraft. The junior year emphasized astronautics, including orbital theory and mechanics, propulsion, and support systems.  They used the textbook, Understanding Space, which is the introductory space text used at the US Air Force Academy. The senior year, students worked on engineering projects, many which included some kind of state or national competition. During this time, Bill was an Adjunct Professor at Embry-Riddle Aeronautical University for one year and Seminole State College (SSC) for five years. As an Adjunct Professor at SSC, his students earned two college credits for an Introduction to Engineering Careers course and an Engineering Concepts Methods course where they learned to use EXCEL and MATLAB software to solve engineering problems. Bill retired from teaching in June 2014.

Bill earned numerous outstanding teacher awards including the AFA State Teacher of the Year and Lyman High School Teacher of the Year. Bill was named by the USA Today newspaper to their 2007 All-USA Teacher Team, one of 20 teachers selected nationwide for their promotion of teaching in the Science, Technology, Mathematics, and Engineering () fields. In 2007, Bill earned National Board Certification from the National Board for Professional Teaching Standards (NBPTS).

Bill has been active volunteer for many years in the Air Force Association (AFA), working.at the local, state, and national levels. He has served as a Chapter President, a Chapter and State Education Vice President, the Florida State Executive Vice President and Florida State President. Bill has been a member of the AFA national Aerospace Education Council for 7 years, which directs and oversees all AFA Education Programs. In 2015, Bill was Chairman of an AFA Space Task Force which developed StellarXplorers, the first national high school space competition, and continues today as the Chief of Academics and Training.

Sessions in which Bill Yucuis participates

Sessions in which Bill Yucuis attends