Track:
Grades K-12
What:
Panel
When:
12:15 PM, Saturday 6 Feb 2021 CST (1 hour)
Where:
Virtual session
This session is in the past.
The virtual space is closed.
Are you a speaker or staff?
How:
Join us for a special panel on the research being conducted on the International Space Station. The event will be led by Dr. Liz Warren, Ph.D., Senior Program Director, ISS National Laboratory.

Dr. Lucie Low is a Scientific Program Manager for the NIH Tissue Chips (also known as ‘organs-on-chips’) program at the National Center for Advancing Translational Sciences (NCATS) at the National Institutes of Health (NIH). She is also the NIH-NASA Liaison Point of Contact at NIH, working with colleagues across the government and beyond to discuss and facilitate collaborations between NIH and NASA.

Prior to joining NCATS, Dr. Low was a Staff Scientist performing neuroscience research on chronic pain at the National Center for Complementary and Integrative Health (NCCIH) at NIH. Dr. Low obtained her Masters and PhD in Neuroscience from University College London in the UK and completed postdoctoral training at McGill University in Montreal, Canada. When not working, Dr. Low enjoys attempting to train her cat to “fetch” (a new pandemic hobby) and skydiving.

Rihana Mungin is a mechanical engineering graduate student studying microgravity capillary fluidics at Portland State University. Notably, she worked with Nickelodeon and NASA to support the Slime in Space demonstrations aboard the International Space Station (ISS). She went on to co-host Slime in Space: A Virtual Field Trip and created an exciting educational STEM environment for grade school children to engage with the low-gravity gooey slime content. Additionally, while working alongside NASA scientists and engineers, she applies her research to develop novel and autonomous liquid delivery methods for the Plant Water Management (PWM) project and studies the fundamentals of evaporation in the absence of gravity to support the Capillary Structures for Exploration Life Support (CSELS) experiments. She will graduate with a M.S. in March 2021.

Warren, Ph.D. is a Senior Program Director for the International Space Station U.S. National Laboratory.  She has been involved in spaceflight research for over 25 years.Dr. Warren was born and raised in the San Francisco BayArea, and attended the University of California at Davis for both her undergraduate and doctoral degrees in physiology. For her doctoral work, she investigated the effects of gravity as a continuum on energy balance in rats. She completed post-doctoral work in cancer biology at the San Francisco Veterans Affairs Laboratory of Cell Growth, and in the Neuroscience Laboratory at NASA’s Johnson Space Center.  She has performed a variety of roles at NASA, including serving as Deputy Project Scientist for the NASA Bed Rest and Artificial Gravity Projects.  Dr. Warren also spent several years as an Operations Lead in Mission Control for the ISS Medical Project.  Liz is a passionate science communicator and an advocate for human spaceflight and STEM. 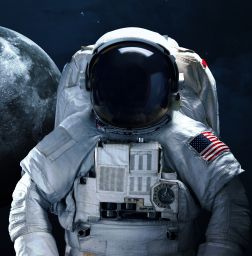